Introducing a New Dog
to Your Dog at Home 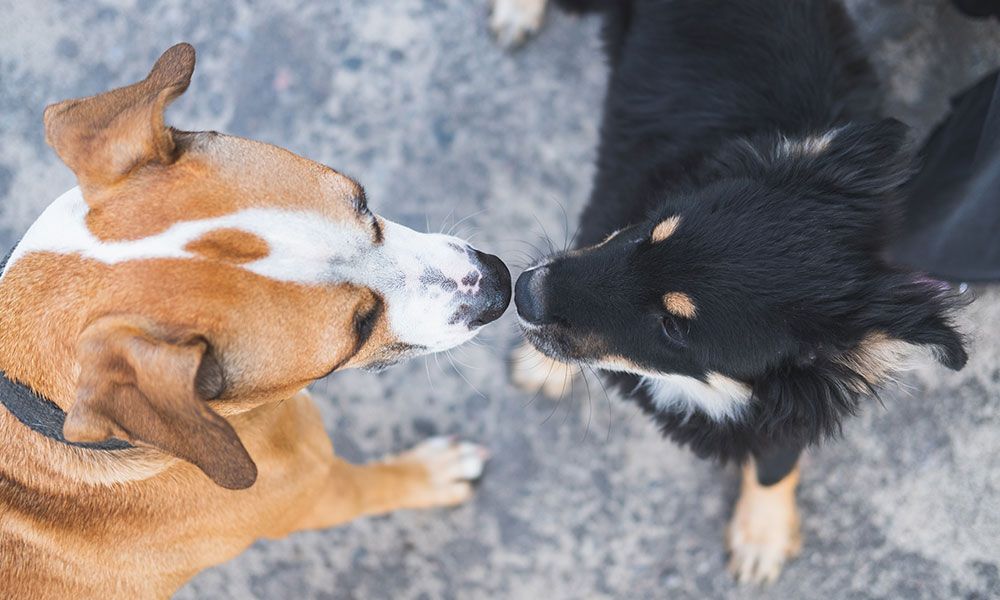 7 tips for a successful Introduction

Animals that live in groups, like dogs, establish relationships, through which the individuals involved interact and live together. The roles that the individuals play within the relationship can change with each new day or situation. These relationships also take time to build, so proper introductions are important to help the dogs adjust to one another and start to build on their relationship.

1: Introduce one dog at a time

If you have more than one resident dog in your household, it may be best to introduce the resident dogs to the new dog one at a time. Two or more resident dogs may have a tendency to “gang up”; on the newcomer.

Introduce the dogs in a neutral location so that your resident dog is less likely to view the newcomer as an intruder. Each dog should be handled by a separate person. With both dogs on a leash, take them to an area with which neither is familiar, such as a park, where you can go for a walk together.

If adopting a new dog from a shelter, we recommend bringing your resident dog with you to the shelter and introducing the dogs before adopting. Take the dogs for a walk starting out approximately 10-15 feet apart, slowly allow the dogs to get closer together but do not allow them to meet while the handlers are holding the leashes. Give simple commands and offer food rewards often throughout the walk. 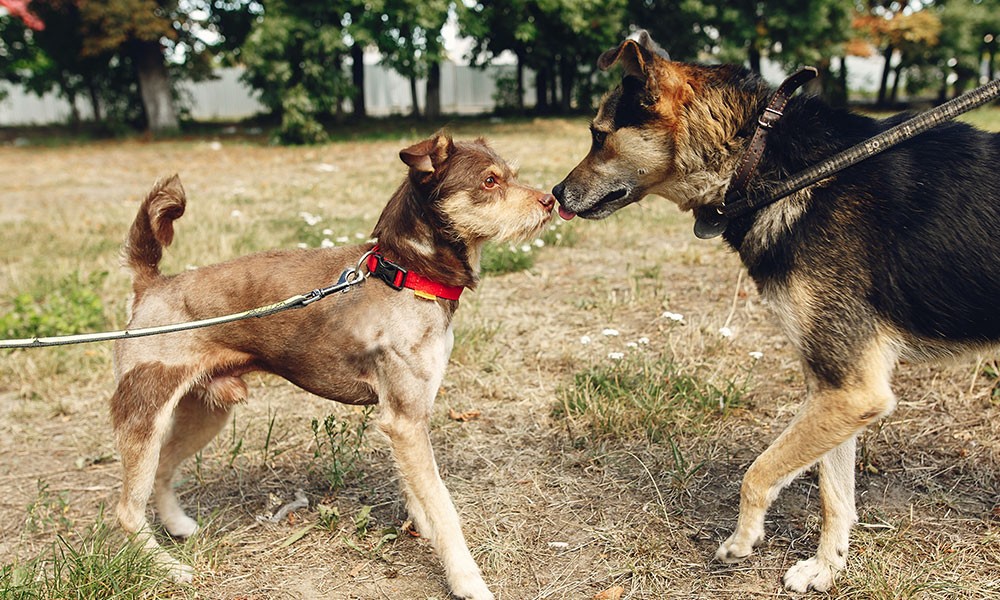 3: Be Aware of Body Postures

One body posture that indicates things are going well is a “play-bow.” One dog will crouch with her front legs on the ground and her hind end in the air. This is an invitation to play that usually elicits friendly behavior from the other dog.

Other appropriate investigative behaviors might include sniffing the air in the direction of the other dog, looking at or walking toward the other dog with a tail that is low and loose and wagging in a large arch.

Watch carefully for body postures that indicate an escalation in response, teeth-baring, deep growls, a stiff-legged gait, or a prolonged stare. If you see such postures, interrupt the interaction immediately by calmly and positively getting each dog interested in something else. For example, both handlers can walk backward while calling their dogs to them, have them sit or lie down, and reward each with a treat, then resume your walk.

Raised hackles, or hair standing up on the dog’s back, may indicate that the dog is concerned and needs more space from the other dog and time to acclimate. It is not necessarily a concern but is something to notice in conjunction with other body language.

When the dogs seem to be tolerating each other without fearful or aggressive responses and the investigative greeting behaviors have tapered off, you can take them home to your backyard or to a friend’s neutral backyard. Bring both dogs into the yard and, when they are ignoring each other and perhaps sniffing around the yard, drop the leashes. Allow the dogs to investigate the yard and each other without interference from the handlers on the ends of the leashes.

Don’t force any interaction between the dogs. If the dogs ignore each other at first, or if one dog seems reluctant to interact with the other, that’s okay. It is appropriate for one dog to tell the other that they are moving too quickly or coming on too strong; this can be done with a growl, a bark, a lip curl, or even an air snap.

Consider allowing them to communicate with each other. It becomes inappropriate or problematic if it is a prolonged correction from the dog after the corrected dog moved away or if the corrected dog doesn’t back off. Give both dogs time to get comfortable. They’ll interact when they’re ready. 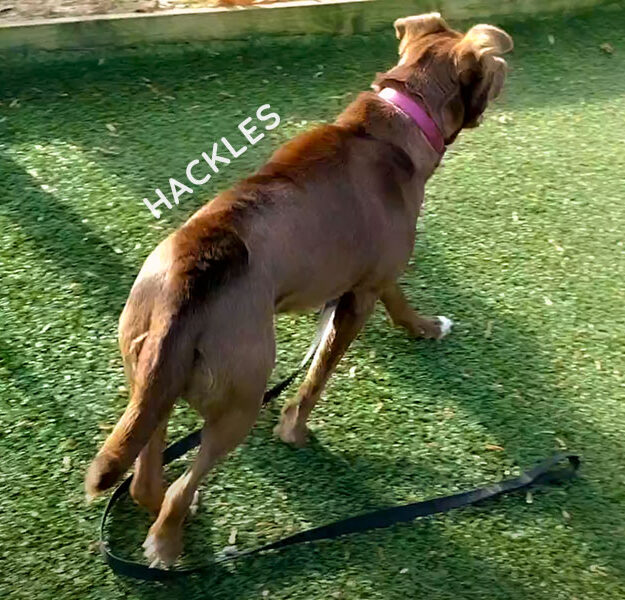 Carefully watch the body language as described above. Hackles, or the raised hair along a dog’s back, are an involuntary response to excitement, arousal, fear, anxiety, or any other number of emotions. Hackles alone can’t tell you whether or not a dog is concerned about the other and they may calm over time.

Keep an eye out for other concerning body postures coupled with hackles before intervening. If you are concerned about the body language, the handlers can pick up the ends of the leashes and move in opposite directions to move the dogs away from one another.

Carefully watch the body language as described above. Hackles, or the raised hair along a dog’s back, are an involuntary response to excitement, arousal, fear, anxiety, or any other number of emotions. Hackles alone can’t tell you whether or not a dog is concerned about the other and they may calm over time. Keep an eye out for other concerning body postures coupled with hackles before intervening. If you are concerned about the body language, the handlers can pick up the ends of the leashes and move in opposite directions to move the dogs away from one another.

Once you are comfortable that the dogs are doing well together outside the home, pick up the leashes and take the new dog into the house while the second person remains outside with the resident dog.

Giving the new dog an opportunity to explore the home on her own can allow the dogs time to relax from the initial meeting as well as give the new dog a chance to get to know her new surroundings without the established dog interfering. You can also take this opportunity to remove any food, toys, bones, bedding, or other items that might trigger conflict between the dogs. Peek under the furniture and in between couch cushions for bones and toys hidden away.

Giving the new dog the chance to enter the home first can often diffuse territorial issues. After the new dog has explored the home, bring the new dog into a large room, on a leash, to prevent the dogs from having an initial meeting in the home in a narrow hallway or entryway, and then bring the resident dog into the same room, also on a leash. When the dogs are not focused on each other, drop the leashes and allow both dogs to further investigate the room and each other.

Be patient. Bringing a new dog home requires that everyone make some adjustments, especially your current pets. And it will take time for your dogs to build a comfortable relationship.

5: Do not leave the dogs alone, until you are confident they are getting along

This means observing their behavior toward each other when the door bell rings, when a squirrel is seen outside the window and other such exciting circumstances. It is okay to crate your new dog when you cannot supervise, even if the resident dog is allowed free roam. It is best to place the crated dog in a room behind a closed door away from the other dog so they cannot “talk” to each other through the crate door.

Take your time to observe their interactions before choosing to leave them alone unsupervised. Consider getting breakaway collars for safety for crated dogs and when two dogs are playing to avoid any accidents. 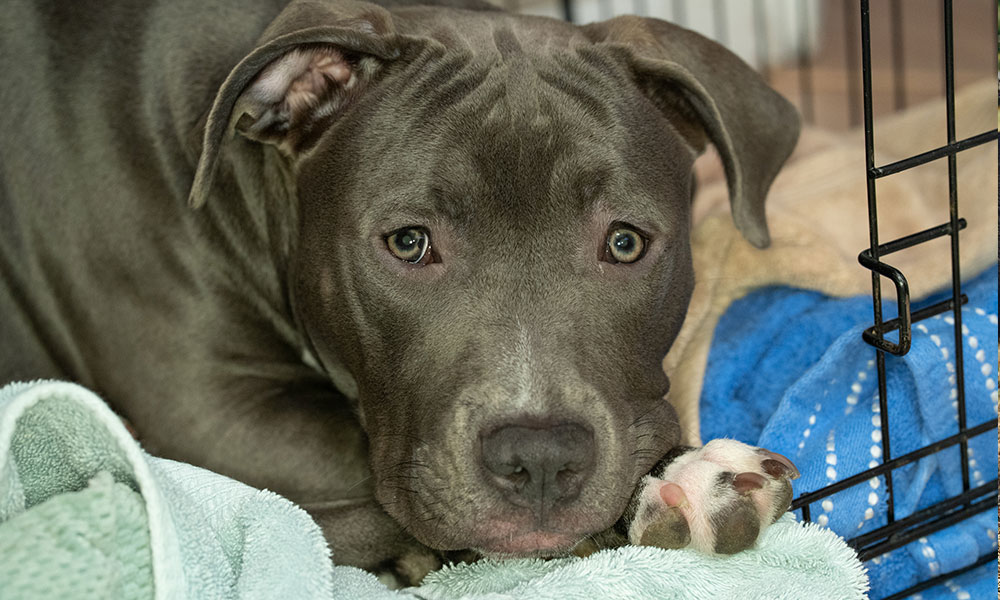 Well-socialized adult dogs with good temperaments may set limits with puppies with a growl or snarl, never hurting the puppy although the puppy may yelp out of surprise. This communication is healthy and should be allowed.

Adult dogs that aren’t well socialized, or that have a history of fighting with other dogs, may attempt to set limits with more aggressive behaviors, such as biting, which could harm the puppy. For this reason, a puppy shouldn’t be left alone with an adult dog. Crating the puppy when alone will keep everyone safe and benefit housetraining.

“Be Patient…it will take time for your dogs

to build a comfortable relationship.”

7: 7 additional Tips for a successful introduction

If the introduction of a new dog to a household doesn’t go smoothly; contact a Professional Trainer immediately, for help. Dogs can be severely injured in fights, and the longer the problem continues, the harder it can be to resolve. Conflicts between dogs in the same family can often be resolved with professional help. 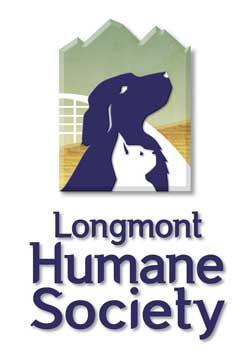 Your gift today helps us redefine the meaning and importance of quality of life for all sheltered dogs. Our work results in urgent and responsible lifesaving, and we’d love you to be a part of saving lives with us. 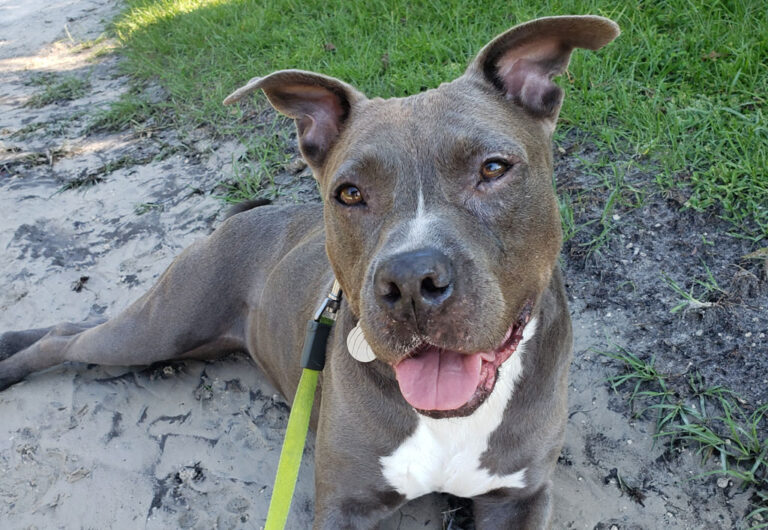 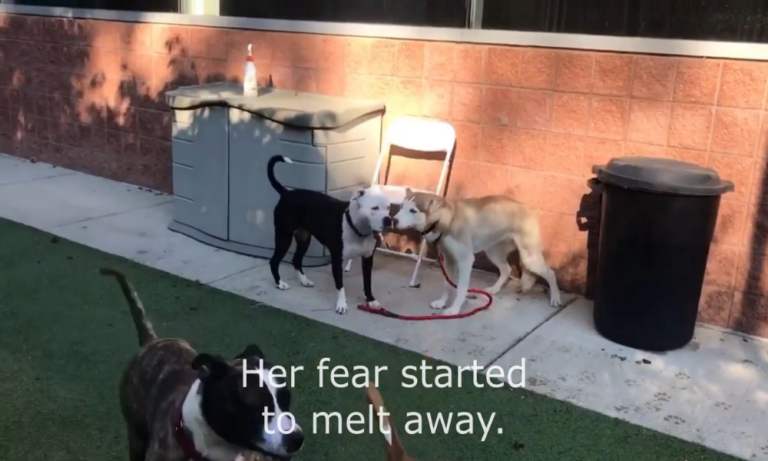 Trust us, you’re going to want to see this the whole way through. We’ve had the privilege of visiting the Cuyahoga County Animal Shelter twice to provide seminars to their incredibly dedicated team. Recently they shared the transformation of a... 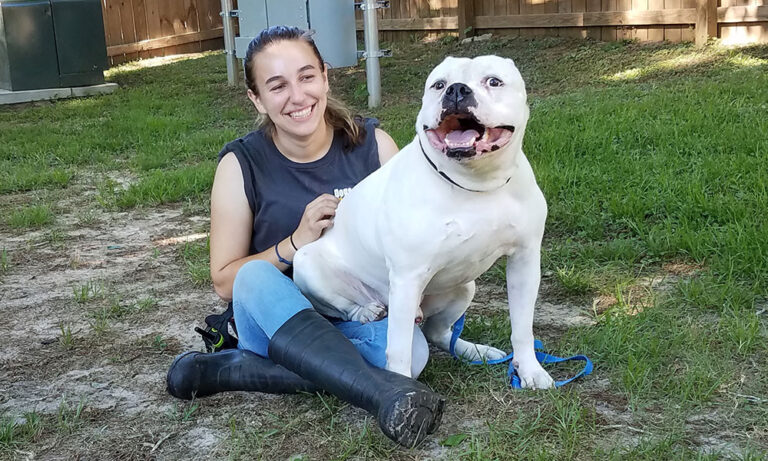 We have a soft spot for all of the dogs that come to Canine Center Florida (CCF), but some just work their way into our hearts a little bit deeper. Patton (whose friends call him Tuna) has been with us... 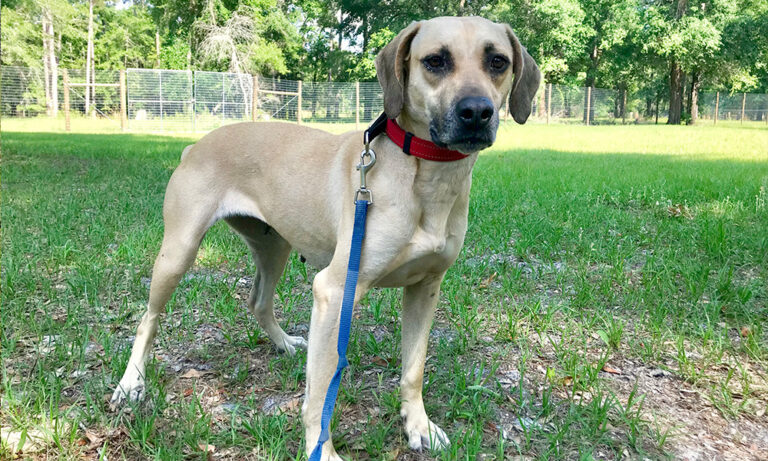 For years, Pretty Girl was “feral” and was having litters of puppies in the woods. Many concerned citizens had tried to catch her for six months. When a nice family finally caught her, they did everything they could think of...

Learn about our vital work in your community, the latest training tips and techniques, and special stories of redemption and love.